There are change afoot, and like Take That once said everything changes but you.

The much loved resin section of the bouldering wall is going.  Work will commence on the new wall on the 17th of September, and though I will miss climbing on it, I will not miss the broken t nuts, the big gaps between the T nuts which leads to inevitable reaches, or the inability to put bigger holds on it in more than 4 places, (or Jon and Tim insisting that the aforementioned big holds fit when they clearly don’t).  I will however miss a few of the classic feature problems, and to that end we are running “Back to the features” for one last time on Friday 14th of September.  Lets see who will go down as undefeated King Resin.

A short history of climbing walls in the UK! 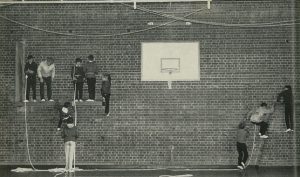 The first wall in the UK was in Ullswater school near Penrith in 1960, as you can see they have moved a long way since these days.  This would have have been built with protruding bricks and stone, much the same as the more famous Leeds Wall, or for a less famous but more local example that still exists would be in Plas Arthur in Llangefni.  As time passed by these building techniques developed, before the concrete/resin type walls such as Salford wall in Broughton, and perhaps the best known of all these generations of wall would be ‘The Wave’ in the foundry climbing wall.  As you can see in the photos one of the main differences is that the Wave has bolt on holds and features whereas the Broughton wall is 100% Features.   Which brings us neatly onto the development of resin climbing holds.  Francois Savigny was an industrial engineer and rock climber, founded Entre-Prises in 1985 and sold the first commercially available bolt on holds.  14 years later in 1999 the same company built the Indy climbing wall. 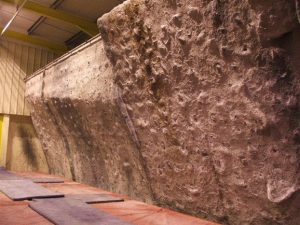 It can’t have been long after the building of Indy that these resin bouldering walls gave way to a simpler ply board style.  During the first refurbishment in 2012  Jon insisted we should keep it, with another 6 years of wear and tear the time seems right to let it die. Clearly they did a better job of the mix in some of the other walls.  Still the future looks bright and shiny, there should be a good mix of angles roughly like it is now with added slab, however the arch will close.

We will also be replacing the matting in the same week.  Tune in next week for a history of matting in climbing walls (not really).  We will soon know exactly when and how much we will need to be closed and will get you updated.

Email for any info
Toggle the Widgetbar