The world appears to think something important has happened but Massive Monday, the feature night, trumps all that. 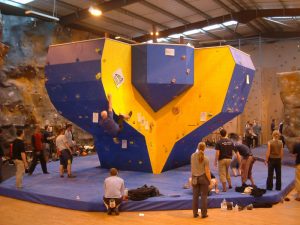 A long time ago, in a very different Indy Wall, an age before beastmakers,  volumes and free standing boulders, we only had the resin wall or the old wall as its now affectionately known.  And over time as was the habit was in those dark ages, problems emerged on the features.  Some were marked up, some were graded and some were still born.  When the bloc arrived, these problems drifted into obscurity gathering dust, then wit

h the great refurb in 2012 the wall was painted (indeed it narrowly survived extermination) and those that were marked up were lost for good, or so it seemed! However when we were thinking of ideas for the series of themed comps for the winter feature night was top of the list, well just under “The volumiser” which will be coming on February 6th anyway. 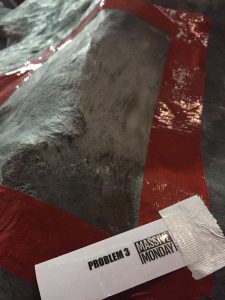 The starting hold of a Font 5 that caused much fuss…

Collective memory was scoured and some of the problems that emerged are from a era that even pre dates Jon.  Which is saying something, many of them date back to the original AMA bouldering comps of the late 90’s.    Problem 3 was the very delicious one mover that requires a bit of poise and a pounce.  At one point Jon turned to me and said look at that he is turning it into a 7c as one of our regulars got it all wrong…

20 problems all on the feature walls, 10 points for flash 1 point for 9+ goes and everything as you would expect in-between! Many score sheets went out and as always less came back, those that did had ticks all over.  So lets have a run-down of what went on by category.

Series leader, Andy Godber had a meeting.  Second place Ray Wood was somewhere doing something unavoidable, although with 90’s resin walls being what they are his poorly finger will probably be grateful! Phil “the feature” Targett was a no show, which ruined my bold predictions that he would outdo most in this event.  In short the old people all forgot to turn up.  You let me down!

Nobodies who are boys:

The Spaniard, Pedro Di Brenina made an appearance giving the comp an international flavour.  His shouts and screams when he finished problem 9 to tick the lot, caused a hush to descend. I think most people thought someone had broken something!  His happiness at doing every problem was clear as he breathlessly repeated “I’ve never done every problem in a comp before” more than a couple of times.  The clear sheet was enough for him to edge out Rhys for third spot on the night, and leave them in a joint 2nd place overall. Wolf rocked up after he put the kids to bed and 45 minutes later had flashed almost everything, apart from the aforementioned Font 5.  Still his score of 196 was enough to edge Derw down to 2nd although no one was beating him for enthusiasm and beta distribution.

Nobodies who are girls:

Series Leader Charlie has been sliced and diced to fix her dickey shoulder, you are excused.  No one turned up.  You lose.

Students who are boys:

A decent turnout thank you.  Quiet a few who had missed round one came along and when the dust settles at the end this will not affect the series scores as we are letting you all drop your worst round.  Its not going to get much worse than a no show!  At present Max is running away with it in first place with a win in round one and second for round two.  Terry Cox fails most for losing his sheet therefore scoring 0 when he came saw climbed and left again! Dan Hobbs won the event and sits in 3rd over all with a zero for round one.

Students who are girls:

I found a couple of abandoned sheets at the end of the night which I don’t think had been ticked fully but there you go you gotta be in it to win it! 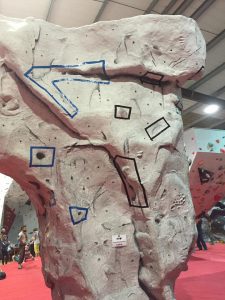 Kieran had an exam so failed to turn out.  Archie took full advantage of his outdoor knowledge and took a comfortable victory, his third in round 1 and first in round 2 sees him top of the charts at present.   Kai had a bad day and I quote “turns out I really really don’t like climbing on features”  Once again 2 scoring rounds keep him high for now in 2nd place.

The closest category of all! With a win each and a second place each Abi and Sophie are neck and neck.  I can see this one going down to the wire…

In other category’s Ruby Wood climbed really well, only problem is she was the only one turned out in her so she wins regardless.

Email for any info
Toggle the Widgetbar
Posting....